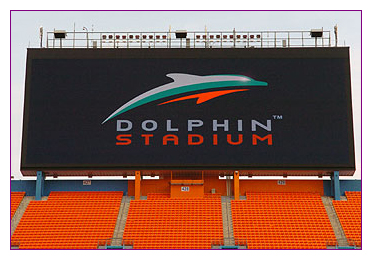 Take a trip down to Miami's Dolphin Stadium on game day and check out the replays on the world's biggest high-definition screen: the 720p display is 137 feet wide by 50 feet high, making its diagonal dimensions 1,750 inches. It was custom built by South Dakota-based Daktronics. The facility is the first NFL venue to implement true HDlarge screen video.

See if you have what it takes to chip your ball over the water and onto this 3 foot x 5 foot floating island green. A great way to practice with your favorite club, you can mix it up by relocating the chipping pad or moving the hole. Includes 12 floating Velcro® - covered balls in 4 colors. 18"L x 24"W. 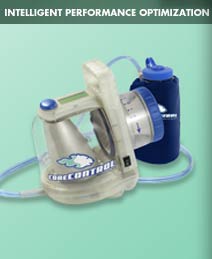 In the last decade, more than a dozen NFL players have died because of heat-related problems. But Dennis Grahn and H. Craig Heller, senior research scientists at Stanford University's Department of Biology, hope to change that with their CoreControl RTX.

Using the principle of rapid thermal exchange, the CoreControl cools the body core in 10 or 20 minutes. Human shed heat from the skin of their ears, nose, palms, cheeks and soles of their feet. This machine chills the palms to stabilize core temperature.

CoreControl has been shown to enhance an athlete's work capacity during both aerobic and strength training, especially when the athlete is working at or near maximum performance levels. Firefighters, soldiers and construction workers are others who could benefit from the machine. View a video of the machine in action here. 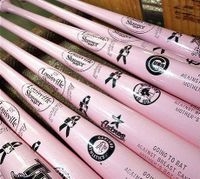 Photo via book of joe

Louisville Slugger has manufactured 400 pink bats to support the Susan G. Komen Breast Cancer Foundation. They are asking Major League Baseball players to use the bat today on Mother's Day. Fifty players, including Derek Jeter, David Ortiz, Chris Burke and Kevin Mench, have agreed to do so. (Pink is not an approved bat color, but Major League Baseball is giving special permission to players who want to swing the bats on Mother's Day.)

Along with the pink bats, players and all on-field personnel will wear pink wristbands and a pink ribbon for breast cancer awareness on their uniforms. The pink ribbon logo will appear on the bases and on commemorative home plates, and the lineups will be written on pink cards. The bats, along with the home plates and lineup cards, will be autographed by the teams and will be auctioned off later with the proceeds going to the Breast Cancer Foundation. 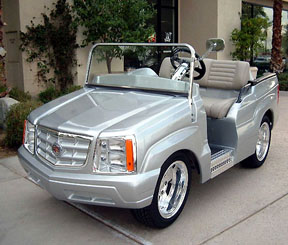 The Cadillac Escalade Golf Cart has a base price of $15,500. But you'll definitely want to upgrade for the extras: leather seats, AM/FM/CD player and 15-inch billet rims. Some courses won't let these super-sized golf carts on the course but you can always use it to tool around your large estate or gated community if nothing else. ;)

Best Play of the Game: Randall El's pass (the 1st touchdown pass ever thrown by a wide receiver during the Superbowl)

Best Commercial That Didn't Have To Be Good: Ameriquest

Strangest Celebrity Placement in a Commercial: Jay Mohr for Pepsi

Best Lesson Learned: NEVER host the get-together. It interferes tremendously with watching the game when people need to know really dumb things, like where the spoons are (there's only eight or so drawers in the kitchen, people...open them and look inside), where the bathroom is (this is a three-bedroom house...open the doors and look inside) and where the rest of the cheese dip is (you ate it all, people, go to the store. I'm not making anymore. I WANT TO WATCH THE GAME!) ;)

Next year, I'm so going to Hooters.

Best Use of Animals in Commercial: Careerbuilder.com

Best Football Trivia: The New Orleans Saints will play their first game in the Superdome on Sept. 24, 2006, against the Atlanta Falcons.

Life as a sports fan will never be the same

With Sanyo's MVP, you can follow every play, manage your fantasy team and watch the latest video highlights. But it ain't cheap. The phone starts at $199 and the pricing plans begin at $65 a month, which includes 35 MB of data transfer. (And if you think you will be a heavy user, you may want to upgrade the memory card to 1 GB for $105 - it comes standard with 16 MB.)

Maxsight contact lenses, created by Nike and Bausch & Lomb, filter the blue wavelengths from natural light to improve an athlete's vision without the bulk of tinted glasses or goggles. They are available in two shades: gray-green or amber.

Another kind of NFL trade

Jeff Ma, the former MIT student who led a card-counting scheme, and Mike Kearns, a former sports agent, have founded ProTrade, a Web site that works like a stock market for pro football players. Users "buy" shares in players. (No money changes hands - but prizes are awarded at the end of the season to "investors" with the best portfolios.)

And if you want to stay updated on new developments, like basketball coming soon, stay tuned to Jeff Ma's blog.