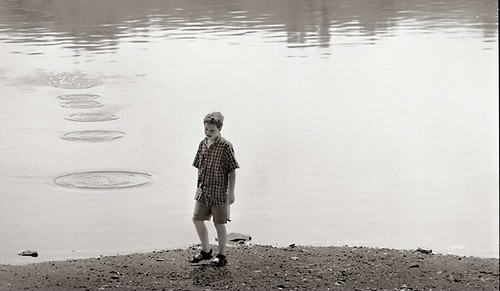 French scientists have investigated the physics of stone-skipping to learn the best throwing angle, speed and spin. They built a unique stone-skipping machine that shows the key to maxing out your rebounces is lofting the rock onto the water at a 20-degree angle. This "magic angle" proved to be far more important than either speed or amount of spin.

Other tips to make you a super stone skipper:

May the Force Be With You

Arriving from a galaxy far, far away, the new exhibit Star Wars: Where Science Meets Imagination makes its earthly debut at Boston's Museum of Science on Oct. 27. Film clips, models and props from all six films teach about the real-life technology in the movies.

Climb into a hovercraft to feel the power of Luke's landspeeder. Assemble a robot like R2-D2. Learn about magnetic levitation technology by designing your own small-scale land vehicle.

A few of the vehicles from the movies and some original costumes will be on display. The exhibit will be in Boston through April 2006. Tickets, including museum admission, are $20 for adults and $17 for kids ages 3 to 11. Public tickets went on sale on Aug. 15.

After Boston, it travels to Columbus, OH, for June through August of 2006. And ends up in Portland, OR, at OMSI from October through December.

There is also a special section on the Web site where educators can find lesson plans to mix Star Wars and science lessons. And for us parents, they offer a Floating Vehicle Design Challenge that looks like fun.

Scientists have invented an energy-harvesting backpack that generates useful amounts of electricity from the up and down movements of its cargo compartment.

Future versions of this backpack could allow disaster relief workers, explorers or soldiers to go out into the field with fewer heavy replacement batteries for cell phones, GPS instruments, night vision goggles and many other portable electronics. Refinements of the design could also lead to backpacks that are more comfortable and perhaps better for the back.

Human hips rise and fall about five centimeters with each step and a backpack worn by a person who is walking rises and falls as well. The new backpack converts mechanical energy from the vertical movement of the backpack's cargo to electricity during normal walking. The vertical movement of the backpack's cargo compartment (with respect to the pack's frame) turns a gear connected to a generator at the top of the pack.

Turning this gear leads to the production of electricity via the turning of coils of wire within a magnetic field inside the generator. A weight of 38 kilograms produces up to 7 Watts of electricity.

In a related "Perspective" in the 9 September 2005 issue of the journal Science, Arthur Kuo suggests an explanation for how the backpack harvests electricity with only a relatively small increase in metabolic cost as compared to the cost of wearing a regular backpack of the same weight.

Science subscribers can read the article here. The related Perspective can be found here.

See also a video of the backpack in action.

Who's in charge--you or your brain?

Kathy Sierra has a great post on Creating Passionate Users about some hard-wired aspects of our brain that we simply cannot overcome.

That's why it surprises me how little the average person knows--or even cares to know--about how their own brain works. Most of us go through life under the illusion that we're in charge of our all of our reactions. And it's just not so.