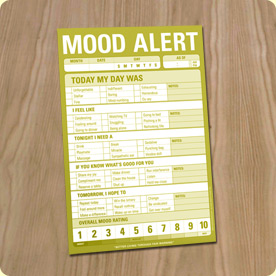 This pad could save your relationship. Why leave emotional communication to chance when you're in a bad mood? One note from this pad would be considered fair warning in some courts of law. ;)

Jason Pellegrino says the problem with Internet dating services is not enough hot-looking people are posting profiles. So he and Sean Cohen created www.hotenough.org - for "fit, good-looking" people.

Prospective members must submit pictures and must be rated an 8 or higher by people already in the club. Once you're in, you can e-mail other hotties for $9.95 a month. A few months after launch, membership was at about 1,000.

Hey, it sounds like Darwinian cruelty, but if all you are looking for in a prospective partner is hotness, this may be the place for you.

I haven't found a business partner yet, but Jason and Sean inspired me to come up with a few more ideas for dating services:

For when you've really, really mussed things up 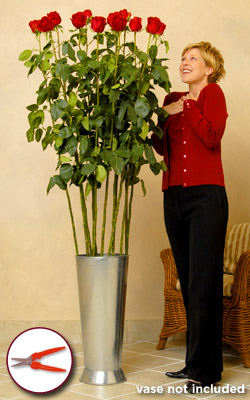 The world's tallest roses. They measure over five feet in height.

Yes, love can break your heart

Broken-heart syndrome (also known as acute stress cardiomyopathy) is a medical term coined by researchers at the Johns Hopkins Heart Institute in Baltimore. The condition occurs when an emotional trauma makes the brain release so many stress hormones that heart muscles become paralyzed and almost stop pumping blood. The result is symptoms, such as chest pains and shortness of breath, that resemble a heart attack - but, unlike a heart attack, the condition is reversible. (So lovesickness probably won't kill you, but it could send you to the emergency room.)

Create your own custom candy for Valentine's Day

Use a fine grater to sand off the messages on Conversation Hearts, then write your own sweet nothings with a food-coloring marker!

How to keep your husband 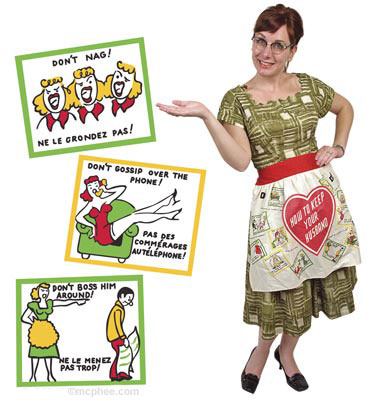 No need to worry about it anymore. Just wear the apron, read it and sweep! No nagging, no gaining weight, no gossiping, no bossing him around. It's simple really. Perfect gift for the staunch feminist on your list! ;)

Kit contains earplugs and a blindfold. ;)

"First love is only a little foolishness and a lot of curiosity."
—George Bernard Shaw

Pamela Weintraub had an interesting article in Psychology Today (July/August 2006) about how early love affairs leave a particularly vivid mark in our minds. And the spark seems to be easily rekindled. "I've been in love with you my whole life" are common words...even 30 years later (and generally a marriage and kids later too).

In the midst of the Google generation, romantic reunions with old flames are more common than ever. (I mean, before the Internet, it took A LOT of time and effort to track anyone down that moved out of state.) Most of these reunions are between first or early loves and largely took place in their teens or early 20s, according to Nancy Kalish, a psychologist at California State University at Sacramento. (Kalish has the dubious honor of being considered the foremost expert in rekindled romance.)

Surprisingly, these romances are very successful, as long as both partners are not otherwise attached when they reconnect. In Kalish's initial sample of 1,000 lost-and-found lovers, ages 18 to 95(!), nearly three-quarters remained together after a decade of study. And when they married each other, their divorce rate after four years tallied in at no more than 1.5 percent. (Usually, second marriages are fragile. Nearly one-quarter of all couples who remarry get divorced again within five years.)

Most of the people, Kalish says, were separated by circumstance: long distances, family moves, stints in the military, disapproving parents, the uncertainty of youth. The lovers feel their separation was unjust or ill-fated and feel now they have a chance to set everything right.

The dark side, of course, is that sometimes the romance is rekindled even if both parties (or one party) is married. Kalish said that even good marriages are at risk because of the power and resilience of the reunion. In her last sample, more than 60 percent of lost-love reunions involve affairs.

In addition to search engines, high school and college reunion Web sites have attracted millions of registered users, a stomping ground for lost lovers. And, for the most part, people are finding their lost loves quite easily. (The New York Times weddings page recently featured a lost-love couple who wed — he was 93, she was 82 — 70 years after they first fell for each other.)