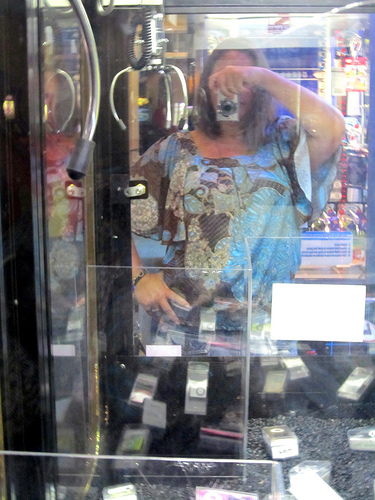 I love claw machines. I don't care what they say.

It's not rigged. It just requires teamwork. Family teamwork. One person at the claw...and a spotter on the side to overcome the distortion of the mirror. 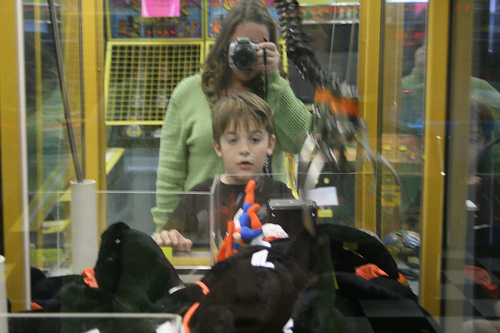 It's only "rigged" when the claw sucks. Which happens often. You put your money in and the claw couldn't pick up a bale of cotton candy, much less a giant SpongeBob. 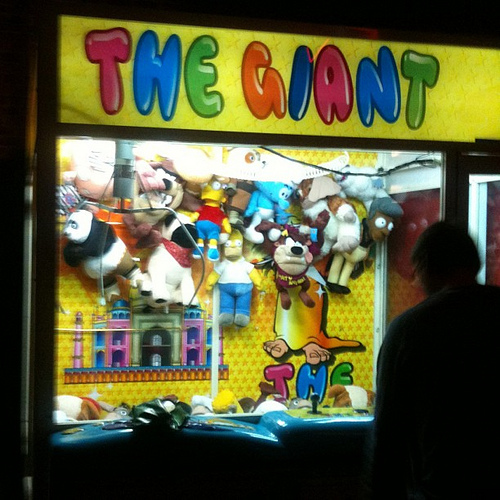 "In a way, it’s like gambling, but with the added detriment that the player might just be terrible at gauging distance."

It all makes perfect sense now! You just leave all the goodies for us spatially challenged gamblers, suckers! ;)

Posted in All About Me, Games | Permalink | Comments (0)

Spore fans get a preview 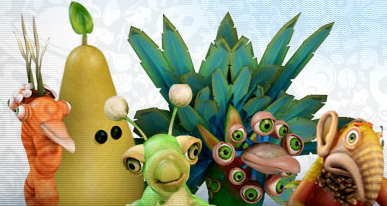 Spore, the latest from The Sims creator Will Wright, isn't due out until Sept. 7, but Electronic Arts recently released Spore Creature Creator, a snippet of the game. A free trial version is at www.spore.com or you can buy the full version for $9.99. The full game will cost $50.

When a creature is uploaded to the Sporepedia, it's automatically added to the game. So the mini-release will lead to millions of creatures ready for pollinating when the full version is released. Create slopes, ski runs, and downhill paths, then test your work by running a sled across them in Line Rider. The tools draw lines pretty much like a pencil. Set 'em up - and run!

In conjunction with its special Stonehenge Decoded on June 1, National Geographic Channel is launching a Stonehenge online game. In the game, players face mini puzzle challenges that, when completed, reveal facts about the history behind the ancient monument.

What's a Dame To Do? 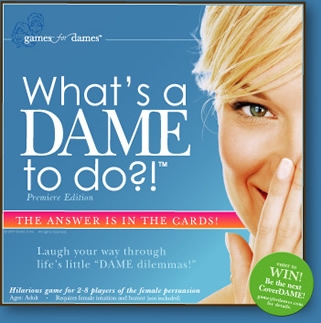 Obviously, some girls just don't know what to talk about on their Girls Night Out. What's a Dame To Do? presents players with a challenge ("What do you do when a guy 20 years your senior hits on you?") and asks each participant to decide how the dame in question would resolve said situation.

And you can help out too by sending in your own dame dilemmas for future editions. Like "What do you do when you need a board game just to have an interesting conversation with your friends?") maybe... ;)

TypeRacer is kind of like SpeedRacer for the keyboard. You can race strangers on the Web or set up a racetrack and challenge your geeky friends to a race.

(And it sure as hell beats that red fox jumping stuff I had to type over and over again in high school!) 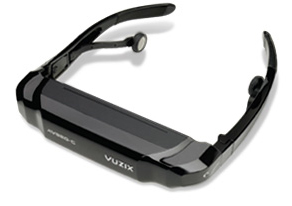 The iWear AV920-C is the littlest big screen around. This virtual reality headset - with a one-inch screen (because you wear it like glasses) - looks 62 inches wide. And it's the first product of its kind that allows up to four players on one game console. Connects to PS3, Wii, Xbox 360, iPod, portable DVD player and more for games and movies.

Please God, I Have So Little: Don’t Take Scrabulous Too

The title of this post is the name of a new Facebook group - but the words could have come from the mouths of my mother, my aunt and myself when the Scrabulous shakedown first started. The women in my family are longtime Scrabble addicts - the men are too scared to get involved.

When I first found Scrabulous, I started a cross-country email game between my aunt, my mother and myself. I found out later they had solitary games going on behind my back too. (Crushed, I tell you! Crushed!) For revenge, I started playing with Twitter friends.

Then the email version shut down for a while. And now it's working again - even though they are still in fights with Scrabble about the game. I don't know why it stopped working or why it worked now, but I do know that the email aspect of it is being overlooked in news stories. It's all Facebook, Facebook, Facebook. But what appealed to me about Scrabulous - and what could not be replicated in the many replacements I found online - was the emailing of the board and how easy they made it. You didn't have to sign in. You didn't have to sign up. For any of the parties. When  you're playing with women over 50 who don't use computers much, this is a blessing.

(And if you're reading this and like to play Scrabble, feel free to invite me to a game.)

The Call of the Wild

WolfQuest is a new video game that lest players run with the wolf pack at Yellowstone National Park. You have to learn how to hunt, survive, defend your territory, find a mate and establish your own pack.  The game was developed by the Minnesota Zoo as an educational program through a National Science Foundation grant. Other partners include  the National Zoo in Washington, the Phoenix Zoo, Yellowstone and the International Wolf Center in Ely.

The game is aimed at kids ages 10 to 15 - but that won't stop you from playing it, I'm sure. (It's one of the things I love about you.) It can be played alone or with up to five players, so no excuses.

Cubed (and squared too) 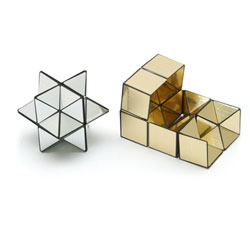 An origami-inspired puzzle...fit the two pieces together or play with them apart.

Yoshimoto discovered this cube when he was searching for a way to divide a cube equally in three-dimensional space. The result is a peculiar polyhedral dyad consisting of eight interconnected cubes that can be opened in multiple ways. The cube can be divided into two cubes and then transformed into two rhombuses, one silver the other gold with twelve faces each. Made of polypropylene.