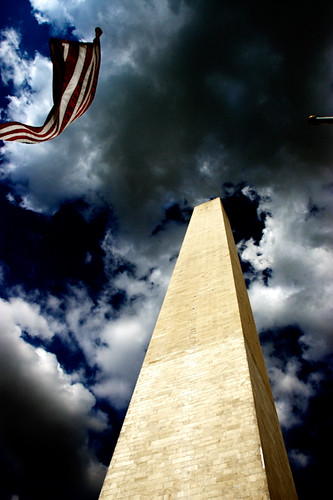 Laurie Olin, the landscape architect charged with redesigning the grounds around the Washington Monument, knew his approach needed to be friendly, simple - and safe. The monument stretches more than 555 feet in the air from the National Mall.

For years, there was nothing but asphalt walkways surrounding the monument. And in the age of terrorism, adding retaining walls/vehicle barriers didn't help much on the aesthetic appeal. But Olin decided to turn the security measures into a beautiful walk.

Olin and his firm won the National Park Service contract to design the landscaping around the monument. Now, after three years of landscaping, a curving pathway starts amid blooming trees and ends with pillow-shape benches made of white granite at the monument's base. Approximately 800 trees were planted to augment the 400 already there.

In June, Sean Penn and two friends traveled to Tehran. It was Penn's first trip to the country. The San Francisco Chronicle is publishing a five-day series of his reports from Iran.

Tucked into a massive appropriations bill approved without fanfare late last year by Congress is the requirement that every one of the estimated 1.8 million federal employees in the executive branch receive "educational and training" materials about the charter on Constitution Day, a holiday celebrating the Sept. 17, 1787, signing that is so obscure that it, unlike Arbor Day, is left off many calendars.

That's not all: The law requires every school that receives federal funds -- including universities -- to show students a program on the Constitution, though it does not specify a particular one. The demand has proved unpopular with educators, who say that they don't like the federal government telling them what to teach and that it doesn't make the best educational sense to teach something as important as the Constitution out of context.

Dick Waterman says that FedEx is charging an $8 fuel surcharge on every package because of the high price of gasoline. Ouch. I wonder how this will affect the eBay crowd?

I've just smiled silently at my computer when reading about PR bloggers being bombarded with press releases and e-mail from fellow PR bloggers (thus getting to know what it feels like on the other end sometimes). But I began howling with laughter while reading this article about journalists' reactions to blogger criticism (and it seems we're still in the basement, as far as journalists are concerned):

The rise of the blogosphere remains one of the most exciting communications developments in decades, giving ordinary folks the chance to bite back at a media establishment widely viewed as arrogant. It's little surprise that mainstream media types don't like being questioned, challenged and chided by critics typing from their basements and bedrooms.

Ironically, most of the criticism of the media began because of the perception that they are not mainstream at all. And it's especially ironic to me that a profession that arose as a sort of watchdog for the man on the street is now complainging constantly about being watched by the man on the street. After all, isn't that what they say to the companies and individuals they write about: If you have nothing to hide, you'll talk to me. Honestly. With no hidden agenda. And I'll write about it. They should be able to offer the same.

CNN analyst Jeff Greenfield likes many blogs and doesn't much worry about "the baked-potato brains who say you're a media whore. . . . On the whole, I'm real happy to know there are a lot of people watching with the capacity to check me. I don't think that's chilling. It's just another incentive to get your facts right."

It's a new era, like it or not. And all companies - news companies included - are going to have to get used to increased transparency and increased communication with all audiences, both internal and external. But it sometimes seems that some of the media believe the lessons they helped us learn about transparency and integrity and questioning the status quo somehow don't quite apply to them.

On April 15, President Bush released his tax return to the public.

In case you were wondering why it costs $50 to fill up your tank...

All about Day-Light Saving Time

Seth got me started. Now I just can't stop. Here's another source about Day-Light Saving Time. (He's right. There is no 's'.)

Currently, in most parts of the United States, timepieces are moved forward one hour in the spring and back one hour in the fall to provide an extended daylight period during the summer months. This is known as Daylight Saving Time (DST). Much debate and many changes led to this present practice. This report provides a brief history of the issues surrounding DST, an outline of the legislation that created and modified it, and a list of references to more discussions.

It takes a chicken

Freud tried. Mel Gibson tried. It takes a chicken, it seems. Chicken of the Sea finds out what women really want. (But I also see that Brad Pitt and George Clooney stranded with me on a small tropical island with no boat, no women, a little hammock made for three and an ever-flowing frozen margarita machine wasn't an option.) ;)

Here's the list of nominees (with citations). And the winners ARE...

And I just ordered Gilead by Marilyne Robinson - I hope it lives up to its prize!