Lady Gaga (also known as Stefani Germanotta) says she is terrified of being a mother as she fears that having children will ruin her creativity. “Yes, some day (I want to have children). Although my womb is not yet beckoning for a child. I’m very far away from that day. I’m also terrified it will ruin my creativity,” contactmusic.com quoted her as saying.

The statement gave me pause for a moment (I mean even apart from wondering if anyone's womb ever beckons for a child and how much creativity is involved in p-p-p-p-poker face lyrics). Does becoming a mother make you less creative?

Sometimes. Yes. But no. But yes. (Maybe the "mommy brain" makes you guilty and indecisive instead of less creative. I don't know.)

And I'm not making fun of Lady. It's a serious question. She's a serious businesswoman. (Fast Company magazine recently named her the most creative person in business. Period. Pretty impressive.)

After thinking about it for a while, I think it all comes down to time and energy. Not beckoning wombs. I think if you're creative, you're creative - with or without children. As a parent, I've been creative in different ways. I've had less time to write. (I almost didn't write this blog entry because I knew it would take a while.) I spend more time in carpool lines and at baseball games. But I still feel creative.

Perhaps it's because, as Aldous Huxley said, the secret of genius is to carry the spirit of childhood into old age. Having kids around you all the time makes that much easier!

(But, Stefani, the kids will be ALL over those costumes, so you best be ready to share!)

Remember the days when you knew your burnt sienna from your tumbleweed? (And lusted after a fresh box with a built-in sharpener that had yet to be touched?)

Take the Crayola Color Quiz to see how many you remember!

Some of the best advice you’ll ever get may come from a cookie. Who amongst us does not have an old tattered fortune that we carry around in our wallet or keep pasted to the front of our refrigerator door? Now all those fortunes with “personal significance”, finally have a place worthy of their “take-out wisdom” to reside.

Paste your favorites in this Fortune Collecting Journal, jot down whatever insight it may have inspired when first read, and create your own lucky little keepsake. Journal also includes descriptions of the animal symbols in the Chinese Zodiac.

Tell a story in six words

Ernest Hemingway was once prodded to compose a complete story in six words. His answer, personally felt to be his best prose ever, was "For sale: baby shoes, never used."

Write your own six word story and post it in the comments, if you're in the mood. Caterina is still working on hers, which contains the word "Leave" so far. (You can leave your story in her comments too - she's much more popular than me since she invented Flickr and all, so your story might have much more exposure there. I won't hold it against you. I promise. I want you all to succeed. Really. Just remember me.)

I'm praying to the literary gods that it's not my personal best, but some days you just don't know. ;)

Waste Not, Want Not

Joe - and Alexander Liberman - reminds us that creativity without waste is impossible. And, interestingly, sometimes the waste is more than just an afterproduct - it spawns a whole new idea altogether. The waste, in effect, becomes the creativity.

Burkhard Bilger writes of many of these unhappy happy accidents in the chemistry lab (The New Yorker magazine, May 22, 2006). Shashikant Phadnis, a young Indian chemist at Queen Elizabeth College in London was instructed to test a new compound - but he heard "taste the new compound" and found it achingly sweet. That compound in its pure form is the sucralose, also known as Splenda, that we stir into our coffee, tea and Kool-Aid today.

This was an interesting tidbit from the article:

When Columbus introduced cane to the New World, the anthropologist Sidney Mintz has noted, sugar was an exotic luxury. Most Europeans had never eaten sugar, but they quickly developed a taste for it. By 1700, the Americas had become a vast sugar mill and the English were eating four pounds per person per year. By 1800, they were eating 18 pounds; by 1900, 90 pounds. But nowhere was the rise of sugar as dramatic as in the New World. Last year, the average American consumed about 140 pounds of can sugar, corn syrup and other natural sugars - 50 percent more than the Germans or French and nine times as much as the Chinese.

I didn't know either that cats can't taste sugar - neither can many dogs, he says. Most other animals can't taste artificial sweeteners.

Lust for sugar seems to be a basically human trait. Newborns are already fixated on sweetness. Sugar seems to trigger the release of opiates in the brain, bringing pleasure and blocking pain.

Americans ate about 24 pounds of sugar substitutes per person last year, nearly double what they did in 1980, yet sugar consumption rose about 25 percent in the same period.

A 2006 calendar, titled Big Brains on Campus, from the University of Illinois' Beckman Institute for Advanced Science and Technology shows MRI scans of the brains of dozens of really smart people who work or study at the school's Urbana-Champaign campus, including Nobel Prize winner Tony Leggett, a physics professor. The idea behind the calendar was to draw attention to Beckman's innovative studies in intelligence, computers, nanotechnology - and biomedical imaging, too, of course. (Their Biomedical Imaging Center performed the scans in the calendar.)

Finally, buff brains get their due! ;)

The calendars are $14.95 and are available online here.

Leonardo Da Vinci used to find inspiration by looking at stains on the wall:

"I cannot forbear to mention ... a new device for study ... which may seem trivial and almost ludicrous ... [but] is extremely useful in arousing the mind ... Look at a wall spotted with stains, or with a mixture of stones ... you may discover a resemblance to landscapes ... battles with figures in action ... strange faces and costumes ... and an endless variety of objects ..."

Communication Nation has an interesting exercise to help us use random patterns for inspiration - and it involves a tea bag, which I have every afternoon anyway, so I might as well put it to good use.

10 Ways to Be More Creative

Here are 10 ways to get your creative juices flowing, courtesy of cmo magazine and Elaine M. Cummings:

1. Eat paste. Practice using all your senses to solve problems.

2. Run with scissors. A sense of urgency may be just what you need to get things done.

3. Don't sit still. Explore new environments. Get out of the office (or the house).

4. Color outside the lines. Look for opportunity in the white spaces.

6. Play with matches. Take a risk. You might be surprised.

8. Get lost in your imagination. When you stretch yourself, there's no limit to what you can do.

9. Play games. Let yourself laugh so hard milk comes out your nose.

10. Take naps. Rest more so you can think fresh thoughts.

Ideas That Are All Wet 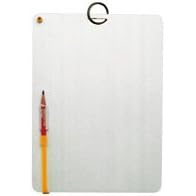 My best ideas come to me walking, driving or in the bathtub. Maybe it's something about being away from any practical way to get the ideas out that make them spring forth. I keep a notebook in my car for the ideas while driving, but I haven't fixed the problem while walking or in the bathtub. But now I can scratch one more off the list.

Alex Hart, president of ATP Solutions, a fellow aquatic thinker, recommends the Innovative Jumbo Dive Slate as a solution in Business 2.0. The boards are used by scuba divers to take notes underwater. You can find them at dive shops or even at Amazon.com.

Waiting for the lights to go out

We've taken the past 200 years of prosperity for granted. Humanity's progress is stalling, we are facing a new era of decay, and nobody is clever enough to fix it. Is the future really that black, asks Bryan Appleyard