Matthew Guinn, who lives in the Jackson area, combines fact and fiction in The Resurrectionist, his Southern Gothic debut novel. (W. W. Norton & Co.; $25.95 hardcover). Based on the true story of Grandison Harris, aka the “Resurrection Man” of Georgia, the novel weaves crime, social commentary and revenge into a moral parable of the South.

Read more from Susan O'Bryan in The Clarion-Ledger here.

On July 13, Guinn will have a hometown book launch at Lemuria Books. On July 16, he will be at Square Books in Oxford. Find his complete book tour schedule here.

The Perks of Being a Wallflower

When I took my son to see The Beasts of the Southern Wild, we saw a preview for The Perks of Being a Wallfower. The preview said it was based on a book. It seemed geared towards a teen audience, so I told him we should read the book together and then go see the movie. He rolled his eyes. (After reading the book, not sure I'm quite ready to discuss some of the themes with my 12-year-old son anyways.)

The book is an interesting read. If J.D. Salinger and Nick Hornby had a love child, this book would be it. Music is almost a third character throughout the book. Music and books. (To Kill a Mockingbird, This Side of Paradise, The Great Gatsby, A Separate Peace, The Catcher in the Rye, On the Road, Naked Lunch, Walden, The Fountainhead, The Stranger, Peter Pan, Hamlet.)

And for those days when you need to remember how you felt in that moment, when you were infinite, here is a The Perks of Being a Wallflower playlist - a combo of all of the songs mentioned in the book and songs from the movie's soundtrack too. (I hope I get a gold star!)

A Diamond in the Rough

Shawn Colvin had a lot of great songs, but, sadly, none about a girl named Shawn, as I lamented many years ago. But, since we share the same (weird) first name, I've always felt a kinship regardless.  She added author to her singer/songwriter title with Diamond in the Rough.

I enjoyed the book, and I collected all of the music she mentioned in the book (including her own) in this Spotify playlist. Enjoy! 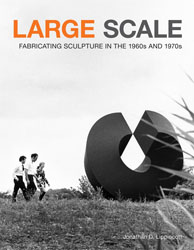 Prior to 1966, if artists wanted to create works larger than their studios or metalworking abilities allowed, they had to turn to industrial manufacturers (usually steel fabricators or boat builders). But the opening that spring of Lippincott, Inc. changed that - and the direction of American art in the process.

To serve the growing need for expert fabrication, the Lippincott foundry opened in North Haven, Connecticut, in 1966. Lippincott was an all-in-one sculpture production center that put the tools of industrial fabrication in the hands of artists, allowing them to produce at a scale they had previously only dreamt of on paper. Over the years of the shop's operation from 1966 to 1994, Lippincott, Inc. has produced sculptures by nearly one hundred artists.

The shop's founders, Donald Lippincott and Roxanne Everett, meticulously documented the working processes of some of the most important American artists of the twentieth century, including Claes Oldenburg, Louise Nevelson, Ellsworth Kelly, Robert Indiana, and Barnett Newman. Large Scale: Fabricating Sculpture in the 1960s and 1970s presents over 300 photographs of artists and their iconic large-scale works including Newman's Broken Obelisk, Indiana's Love, Oldenburg's Geometric Mouse, and Rosenthal's Alamo, many of which have been previously unseen.

At work with Annie Leibovitz

"Things happen in front of you. That's perhaps the most wonderful and mysterious aspect of photography."
~Annie Leibovitz

I just finished Annie Leibovitz's At Work. I expected it to be much more of a picture book, but it delves more into her creative process in planning her portraits and other photo shoots (which is right up my alley).

But, now that I'm done with her book, she's left me a list of many other photographers to study:

And she added to my Reading List Susan Sontag's Regarding the Pain of Others.

I cannot remember a time when I was not in love with them... 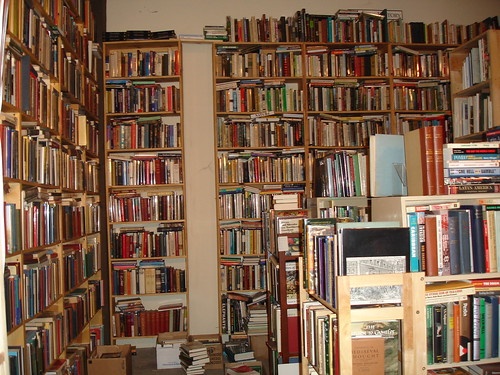 "I cannot remember a time when I was not in love with them - with the books themselves, cover and binding and the paper they were printed on, with their smell and their weight and with their possession in my arms, captured and carried off to myself."
~ Eudora Welty 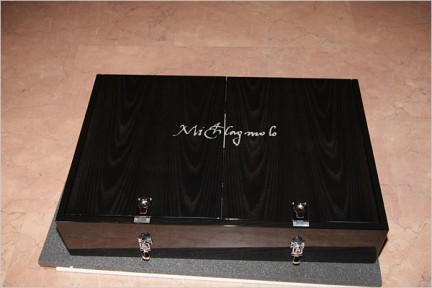 Una Dotta Mano is  being billed as the world's most expensive, most beautiful new book. It's valued at over $100,000. The 62-pound velvet- and marble-bound edition depicts the life and work of Michelangelo - and it has arrived at the New York Public Library fresh from a printing press in Italy and is now on display through Dec. 8. (The copy on display was donated to the library, but more than 20 of the handmade books, which take six months to make, have been sold.)

The book is filled with photographs of Michelangelo's drawings and sculptures. The text is by Michelangelo biographer Giorgio Vasari, with essays by the director of the Vatican Museums, Antonio Paolucci.

All the wrong people have self-esteem 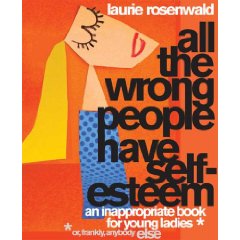 Laurie Rosenwald plugs her new book, all the wrong people have self-esteem, as "an inappropriate book for young girls or anyone else." (Hey, she got my attention!)

With heavy doses of illustration and humor, Laurie tells tales of shoplifting, getting kicked out of yoga and more. She explains some of the "more" below: 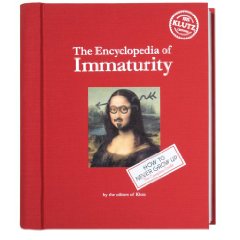 Now you won't have to grow up, with The Encyclopedia of Immaturity to help. It holds hundreds of crazy tricks and goofy ideas for hours of immature fun (and laughter). Learn how to fake a sneeze, how to bounce a doughnut, how to make grass shriek and many other fun feats.

Lessons for Living Fast and Furiously 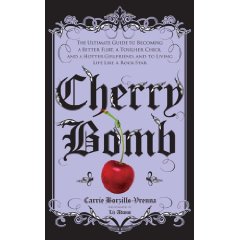 In Cherry Bomb: The Ultimate Guide  to Becoming a Better Flirt, a Tougher Chick, and a Hotter Girlfriend, and to Living Life Like a Rock Star, Carrie Borzillo-Vrenna compiles lessons for living fast and furiously, addressing topics from hairstyles to hangovers besides essays by iconic bad girls like Dita Von Teese and Joan Jett's Runaways bandmate Cherie Currie. (The title of the book comes from a Runaways song title.) Cherie says the book is written "for the woman...who is not afraid to take chances, or boldly go for what she wants in life, be it a man, a better job, or a backstage pass."

She's also recruited a rocking list of contributors who offer advice on all things cool, including: