by Katrina Vandenberg
from Atlas 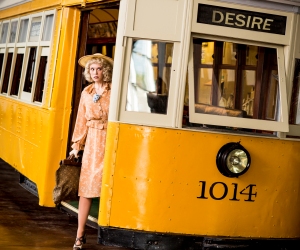 I’m not making this up. In Cafe Latte’s wine bar
one of the lovely coeds at the next table
touched John on the arm as if I wasn’t there
and said, Excuse me, sir, but what
is that naughty little dessert?
And I knew from the way he glanced
at the frothy neckline of her blouse,
then immediately cast his eyes on his plate
before giving a fatherly answer,
he would have given up dessert three months
for the chance to feed this one to her.
I was stunned; John was hopeful;
but the girl was hitting on his cake.
Though she told her friend until they left
she did not want any. I wish she wanted
something-my husband, his cake, both at once.
I wish she left insisting
upon the beauty of his hands, his curls,
the sublimeness of strawberries
and angel food. But she was precocious,
and I fear adulthood is the discipline
of being above desire, cultivated
after years of learning what you want
and where and how, after insisting
that you will one day have it. I don’t
ever want to stop noticing a man like the one
at the bar in his loosened tie, reading
the Star Tribune. I don’t want to eat my cake
with a baby spoon to force small bites,
as women’s magazines suggest. And you
don’t want to either, do you? You want a big piece
of this world. You would love to have the whole thing.