How to tell a leap of faith from a stupid decision 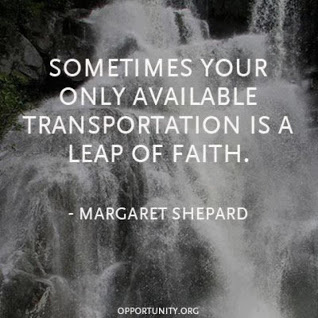 While flipping through the January 2013 O magazine and reading the perfunctory "new year, new you" stories, this sub-headline of Martha Beck's jumped out at me: "How to Tell a Leap of Faith from a Stupid Decision." The slant of the story is that most of the time we don't take chances because of fear, but, I suppose, the advice holds just as true for those of us who tend to leap first and look later. (I can still hear my third-grade teacher, Sister Rose, shaking her head sympathetically and whispering in my ear, "Look before you leap, little one. Look before you leap!")

She points out that it's not unusual for humans to base almost every decision on fear, but "fear-based decisions lead to hollow victories at best, endless regret at worst. Only love-based decisions create lasting happiness."

I was just flipping through a magazine (albeit electronically) a few seconds before, so it took a minute or so for that one to sink in... And then I started thinking about the big decisions I made and tried to determine if they were fear-based or love-based. (And she's the expert and she even admits it's sometimes hard to tell the difference at the time.)

The trick is imagining your world with no fear and making sure the decision is not made on fear of rejection or poverty or looking dumb (or even, sometimes, the fear of succeeding, really).

Need some help? Here's some leaps of faith to get you started in the new year. Take one:

Posted in Being Human | Permalink