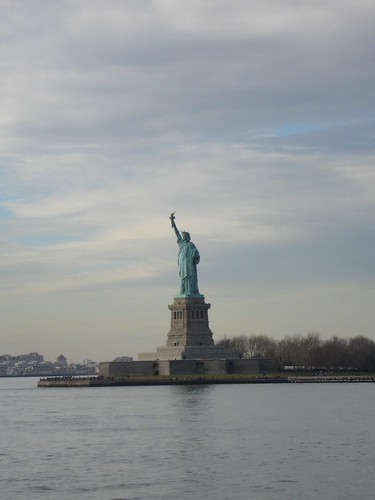 On this day in 1885, the Statue of Liberty arrived in New York Harbor. Formally known as "Liberty Enlightening the World," she was a gift from France, and was funded by the French people.

Sculptor Frédéric Auguste Bartholdi first had the idea for a monument to commemorate the friendship between the United States and France in 1865, but he didn't begin actual construction until the early 1870s; he chose Bedloe's Island — now called Liberty Island — because the statue could welcome the boats full of immigrants, who would pass by the statue on the way to Ellis Island. He was delighted to learn that the island was the property of the United States government, which meant all the states — not just New York — could claim equal ownership in the statue.

Lady Liberty is made of sheets of copper over a framework of steel supports; the framework was designed by Alexandre Gustave Eiffel, of Eiffel Tower fame. She was constructed in France and then was disassembled to make her journey to New York, where she was reassembled to her full height of 151 feet, 1 inch. Mounted on her pedestal, she stands 305 feet tall. Her torch was wired for electrical power in 1916. The seven rays of her crown represent the seven seas and the seven continents; the broken shackles at her feet evoke freedom from slavery and oppression; and the tablet in her left hand represents the law. Bartholdi completed her right arm and torch, as well as her head, before the rest of the statue was designed, and the arm went on display in 1876 as part of the United States Centennial celebrations. Liberty's face was modeled after Bartholdi's mother.

Emma Lazarus's oft-quoted sonnet, "The New Colossus" (1883), which was written to raise money for construction of the statue's pedestal, is engraved on a brass plaque inside it:

Not like the brazen giant of Greek fame,
With conquering limbs astride from land to land;
Here at our sea-washed, sunset gates shall stand
A mighty woman with a torch, whose flame
Is the imprisoned lightning, and her name
Mother of Exiles. From her beacon-hand
Glows world-wide welcome; her mild eyes command
The air-bridged harbor that twin cities frame.
"Keep, ancient lands, your storied pomp!" cries she
With silent lips. "Give me your tired, your poor,
Your huddled masses yearning to breathe free,
The wretched refuse of your teeming shore.
Send these, the homeless, tempest-tost to me,
I lift my lamp beside the golden door!"

[ via The Writer's Almanac ]

Posted in Just Because | Permalink