« It's time for a Pinterest intervention too... | Main | Perfectly Summer Dinner » 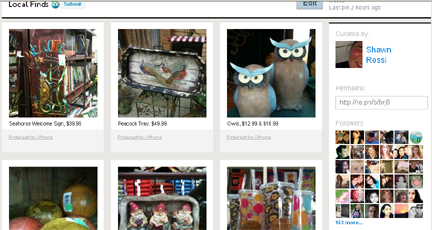 We had to get the oil changed in our cars today (to get ready for our trip to Point Clear, Ala., next week), so, as usual, we walked over to the Lakeland Yard & Garden Center right next door while we were waiting. (And, as usual, we spent too much money on plants. Can't seem to pass a bookstore or a garden center without spending money these days! Sheesh.)

I played with the Pinterest iphone app and tried out its feature of taking pictures and pinning local items. I can see that it would be very useful to help other friends locally find cool things and to remember things that you might want to go back and get later. (I helped a friend make decisions about potential office decorations once and we took pictures and posted them on Flickr, but using the pinterest app would have been much simpler!)

It would also be useful as a local foodie guide. Take pictures and post them. And make the board open so others could post them too!

My only complaint is that sporadically the app just shuts down. It seems to happen more often if you're taking pictures within the app (rather than using the iphone camera and finding the pic in the library).

I hope to use the app more in the coming weeks! Stay tuned! (And see all of my finds at Lakeland Yard & Gard Center here.)