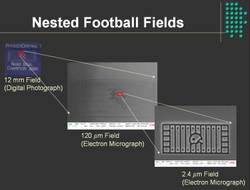 Physics Central is offering $1000 and what they're touting as the "world's smallest trophy" (depicted in the picture above) to the best homemade video explaining some aspect of the physics of football.

Videos should be uploaded to YouTube with the tag "Nanobowl," and an email with the URL sent to the Physics Central organizers. The lucky winner will get a genuine nanoscale trophy made of silicon and metal, with features more than 1000 times thinner than a human hair, visible only under high-resolution electron or scanning microscopes.

The trophy is being created by physicists in the Craighead research group at Cornell University, the organizers say. It appears that winners will have to supply their own electron microscope and magnifying display case, however.