« Variety and the spiciness of life | Main | A Christmas Story » 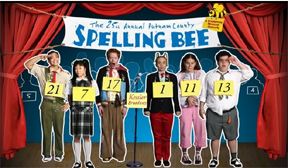 On Tuesday, I took Quentin to see The 25th annual Putnam County Spelling Bee. I was nervous because the last time I took him to a play, Seussical, we had to leave at intermission (and I had bought good seats). He was only three at the time and actually did pretty well until his father put a piece of gum in his mouth and did not have another piece to offer Quentin. Three-year-old meltdown. I'm sure the cast still remembers us - as we exited the building with a three-year-old making more noise than any of them.

I was not worried about a meltdown this time but boredom. He loved it though. He laughed so hard I had to tell him to keep his voice down a few times. And there was no intermission even!

So I was studying the playbill and noticed that almost all of the actors now have Web site addresses listed under their names:

Roberta Duchak - Played Rona Lisa Peretti in the play but also has released her own CD recently. (Check out her music on MySpace or listen to samples on iTunes.)

Andrew Keenan-Bolger - Played Leaf Coneybear in the play. He's got a blog - with videos even. (And from reading his profile, we could trade iPods with no problem, but not many books...and just a few movies. Little Miss Sunshine is one of his favorites too. I agree.)

So that was two of the main cast with Web sites and blogs. Only two. In the entertainment industry. I thought it would have been at least 50%.

I did find some of the other cast members stealthly though. Here's Katy Boren's MySpace page. (She played Marcy Park.) Justin Keyes' Web site is here. (I'm not sure it's the same Justin Keyes, but I think so.) Vanessa Ray and her husband have been filming Marriage Under Construction for HGTV. (And last but certainly not least, Dana Steingold's MySpace page.)

Why I just spent an hour researching this...I know not why. Such is my life. The mystery. The wonder. The wasted hour online. ;)