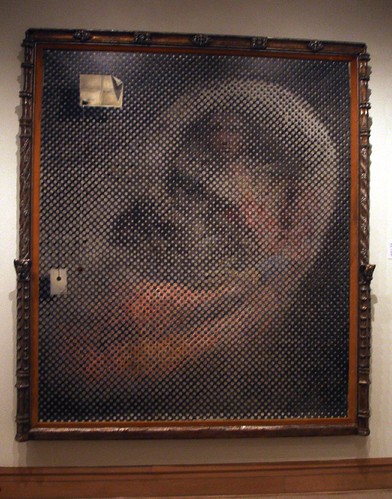 Salvador Dali's Sistine Madonna or Madonn a Ear (a big ear to better hear the music). What big ears you have, dear! ;)

It's much easier to see the Madonna and child in the eight-foot original. And the effect simply cannot be captured in a photograph. You quite literally can't take your eyes off of it in person. It's mesmerizing.

The Sistine Madonna is a huge blowup of a newspaper photograph of Pope John XXIII's ear, with the oversize pattern of halftone dots (pre-Lichtenstein). He paints in the ear Raphael's Sistine Madonna from the 16th century. On the surface, he includes trompe l'oeil objects - a piece of paper, a cherry suspended on a string projecting a shadow.