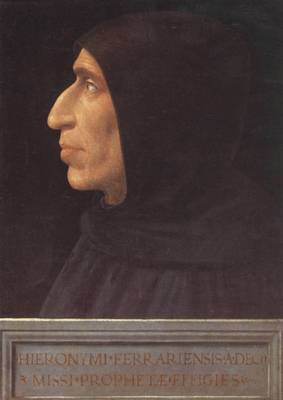 "'A frightful woman! The one thing to be said for her [Mme Blatin] is that she's exactly like Savonarola. She's the very image of that portrait of Savonarola by Fra Bartolommeo."
~Marcel Proust, Within a Budding Grove

Sometimes, out of the blue, life is easy.

Contender Seven obviously went through Proust earlier than me and had already done the research (or found the paining at least).

The Artcyclopedia had this to say about the painting:

Finally, there's more than a trace of unintentional irony in the Portrait of Girolamo Savonarola by the deeply religious Renaissance painter Fra Bartolommeo.

Savonarola was a fanatical monk and self-declared prophet who took control of Florence for four years in the 1490's. He created the original Bonfire of the Vanities, in which countless "lascivious" books and artworks were publicly burned. Savonarola openly challenged the authority of the Vatican, which proved to be a big mistake: he was eventually captured, tortured, hanged, and then burned at the stake for suspicion of heresy.

Fra Bartolommeo was a follower of Savonarola and is said to have destroyed his own paintings in the conflagrations (although the portrait of Savonarola did survive). After Savonarola was overthrown, Bartolommeo entered a monastery and renounced the practice of painting for six years.

So Fra Bartolommeo turned his back on his own art for the sake of Savonarola. When he eventually resumed painting, he must have had Savonarola spinning in his grave when he created an especially vibrant Saint Sebastian - stark naked - for the church of San Marco. Church elders discovered there was a problem when women coming to confession began asking forgiveness for the unholy thoughts the painting inspired, at which point it was removed (and has since been lost).

Posted in Proust of the Day | Permalink