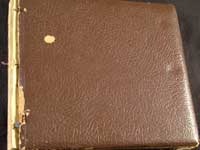 From the press release:

These albums were created by the staff of the Third Reich’s Einsatzstab Reichsleiter Rosenberg (ERR). This special unit was organized in the summer of 1940 under Reich Leader Alfred Rosenberg, initially to collect political material in occupied countries for exploitation in the "struggle against Jewry and Freemasonry." The ERR established its base of operations in Paris in July 1940 and on November 5, Hermann Goering assigned the ERR the responsibility for the confiscation of "ownerless" Jewish art collections. On November 18 of that year, Adolf Hitler ordered that all confiscated works of art be brought to Germany and placed at his personal disposal. During the next several years, the ERR would be engaged in an extensive and elaborate art looting operation in France that was part of Hitler’s much larger premeditated scheme to steal art treasures from conquered nations.

The two photographic albums were in the possession of heirs to an American soldier stationed in the Berchtesgaden area of Germany in the closing days of World War II. See sample images from the album here.