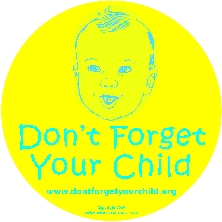 Jennie Trowbridge, a Mississippian and a grandmother, has created graphics to help parents and caregivers remember to look for their children in the backseat. The "Don't Forget Your Child" message is available in bumper stickers, decals and posters.

In Mississippi, there were six reported hyperthermia fatalities of children from 1998-2006. Texas led the country with 41 deaths, followed by Florida with 35 and California with 31. Since 1998, at least 356 children nationwide have died from hyperthermia. So far in 2007, 34 deaths have been reported. (Almost half of the deaths occur because a child was forgotten, according to a study by Jan Null at San Francisco State University.)

Null said there was a big shift in such child deaths following the passage of laws that require parents to move children into car seat in the back seat in response to air bag deaths.

You can order the products at www.dontforgetyourchild.org. Trowbridge says the money from Web site sales go to the cost of printing. She hopes the products will remind parents and caregivers to make sure children were not forgotten in the back seat.

[ via Kathy Hanrahan, The Associated Press ]