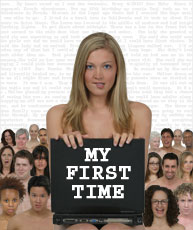 The producers of an off-Broadway show, My First Time, are giving away free tickets to anyone who can demonstrate his or her chastity.

How do you demonstrate your virginal state? (Not to worry, ladies - not in the stirrups.) Producer Ken Davenport said a hypnotist would screen people standing in line for the free tickets to determine their status.

The "virgin" stunt serves the subject of the play, "which is to get people to talk about their first sexual experience, something that almost any person on the planet has in common, whether in the United States or Rome," Davenport said.

The show is based on a decade-old Web site that invites people to anonymously share their stories about losing their virginity.

"I still have the Metallica shirt he wore that night," one person wrote on the site. (My favorite so far is "I remember my first sexual experience. I was alone at the time." Isn't that old Woody Allen material? It sounds like it if it's not. It reminds me of when the Countess tells him he's a great lover in Love and Death and he says, "Thank you. I practice a lot when I'm alone." Maybe that's the connection I'm making.)

The human lie detector, Sebastian Black, describes himself as a mind reader and a psychic hypnotist. "He's a master of body language and tone of voice," Davenport said.

Davenport could not say how many actual virgins were likely to be admitted to the theater for Thursday night's opening.

"There are a limited number of 'virgin tickets' available," he said. "However, there are not that many virgins in New York City."

If you are not eligible for free tickets, you can always visit the Web site and rate your first time.

[ via Verena Dobnik, The Associated Press ]