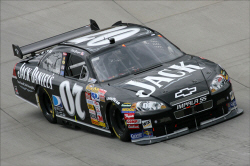 Last year, I started watching Nascar for the first time. I picked the 07 car to root for just because I liked the way it looked best. (I've always liked the look of the Jack Daniels logo though, so that may have something to do with it.) I didn't even know that Clint Bowyer was the driver until this year - I wasn't too interested in the drivers, just the cars. I did think it was neat that it was my first year to watch and it was his first year to drive.

But this year I've learned a little bit more about the sport and even learned a little more about Bowyer. And though it was patly impartial at the time, I'm glad I picked his car. I love the story about how Childress called him when he was still working at a car dealership to come interview - and he was originally afraid to because he thought he would lose his job if the dealership found out. (He did it anyways, of course. He was on an early-bird flight to North Carolina. I love the fact that he raced motorcycles when he was younger. (My eighth-grade boyfriend did the same - I have fond memories of the race track.) 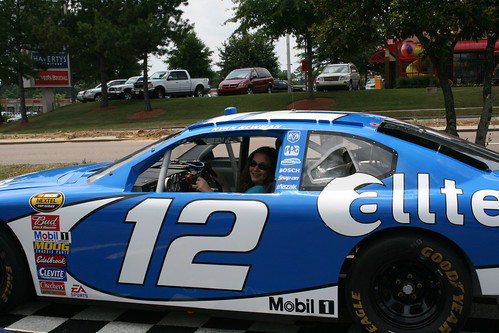 I will have to admit that my Nascar watching was pretty much an arbitrary fascination - until I sat inside the #12 car model when it came to Ridgeland. I flipped the switches. Saw the safety bars. I got to ask questions of the Alltel guys touring with the car. And something happened after I got out of the car. When I watched after that, it changed. I cared more. I couldn't stop watching. I wanted to learn more.