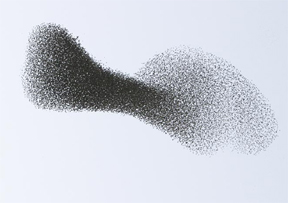 There's an interesting article in National Geographic (available online) about swarm behavior and how we're using insights from swarm theory (think ants and bees) to better manage all complex systems - from air traffic control to robots.

One key to an ant colony, for example, is that no one's in charge. No generals command ant warriors. No managers boss ant workers. The queen plays no role except to lay eggs. Even with half a million ants, a colony functions just fine with no management at all—at least none that we would recognize. It relies instead upon countless interactions between individual ants, each of which is following simple rules of thumb. Scientists describe such a system as self-organizing.

Marco Dorigo, a computer scientist at the Université Libre in Brussels, adapted this formula for use on complex human problems, such as routing trucks, scheduling airlines, or guiding military robots.

It's a pretty fascinating article. And you need to read how thinking like a honeybee will make your next work meeting more successful!

Posted in Being Human | Permalink