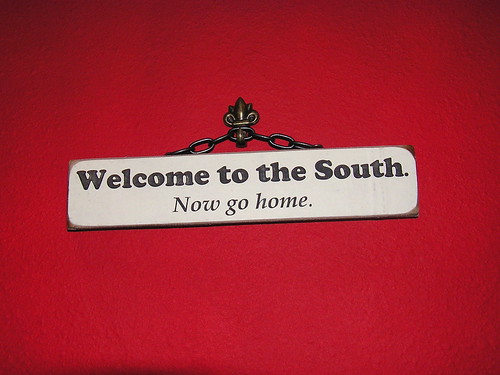 Sign that was in my parents' house in Waveland...now in the Gulf of Mexico somewhere, I guess

Only a Southerner knows the difference between a hissie fit and a conniption fit, and that you don't "HAVE" them, you "PITCH" them.

Only a Southerner knows how many fish, collard greens, turnip greens, peas, beans, etc.,make up "a mess."

Only a Southerner can show or point out to you the general direction of "yonder."

Only a Southerner knows exactly how long "directly" is, ... as in: "Going to town, be back directly."

Even Southern babies know that "Gimme some sugar" is not a request for the white, granular sweet substance that sits in a pretty little bowl in the middle of the table.

All Southerners know exactly when "by and by" is. They might not use the term, but they know the concept well.

Only a Southerner knows instinctively that the best gesture of solace for a neighbor who's got trouble is a plate of hot fried chicken and a big bowl of cold potato salad. If the neighbor's trouble is a real crisis, they also know to add a large banana pudding!

Only Southerners grow up knowing the difference between "right near" and "a right far piece." They also know that "just down the road" can be 1 mile or 20.

No true Southerner would ever assume that the car with the flashing turn signal is actually going to make a turn.

A Southerner knows that "fixin" can be used as a noun, a verb, or an adverb.

Put 100 Southerners in a room and half of them will discover they're related, even if only by marriage.

Southerners know grits come from corn and how to eat them.

Every Southerner knows tomatoes with eggs, bacon, grits and coffee are perfectly wonderful; that red eye gravy is also a breakfast food; and that fried green tomatoes are not a breakfast food.

When you hear someone say, "Well, I caught myself lookin'," you know you are in the presence of a genuine Southerner!

Only true Southerners say "sweet tea" and "sweet milk." Sweet tea indicates the need for sugar and lots of it - we do not like our tea unsweetened. "Sweet milk" means you don't want buttermilk.

And a true Southerner knows you don't scream obscenities at little old ladies who drive 30 MPH on the freeway. You just say ,"Bless her heart"...and go your own way.

And to those of you who are still having a hard time understanding all this Southern stuff ... bless your hearts, I hear they are fixin' to have classes on Southernness as a second language!

And for those who are not from the South but have lived there for a long time, all y'all need a sign to hang on y'alls front porch that reads "I ain't from the South, but I got here as fast as I could."

Bless your hearts ... y'all have a blessed day.

[ sent via my sweet Yankee aunt - and her brother (my father) did have an "I ain't from the South, but I got here as fast as I could" sign in his house until Katrina washed it away ]

Posted in The South | Permalink

Good one! I'll steal it for sure!

I could not live without sweet tea. And, grits and eggs are one of my comfort food meals. Can you tell I'm from the South?