Gettin' ready for some football...

The Redskins and Bengals are making their 2006 debut on NBC's Sunday Night Football. Al Michaels and John Madden make up the network's new Sunday night team. As is usual in pre-season games, they are playing mostly starters. It's generally used by coaches to evaluate who should be designated back-up players during the real season. 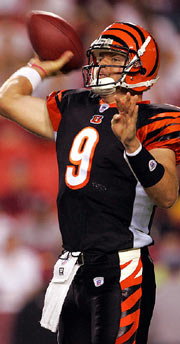 The commentators all spent their time dwelling on Carson Palmer's bad knee...Will he be ready to play in two weeks or not? Is he mentally ready?

Interesting tidbit: Cincinnati Bengals fans will be able to report misbehavior during games this season with a phone call. The team has set up a hot line number: (513) 381-JERK. Security officials will use the stadium’s video cameras to focus on the offenders and respond.

Most Fashionable: Bengals (who have a Fashion Forum on their site even...even if it is a joke, kind of, but it's still there nonetheless) And the Bengals have the great logo and bright colors going for them too in the fashion department.

Rowdiest Team: Bengals (Five players were arrested during the off-season)

Very well put together article and site, I can really see this site taking off even more, great job