Well, all of my flights were fairly uneventful today - I didn't have to drive myself anywhere at least. I had a three-hour layover in Orlando that was actually quite pleasant. The airport has a spa in the main terminal - so I went and got a manicure. (What I didn't know is that once you leave one of the side terminals and exit to the main terminal, you have to go through all security checkpoints again, so my French manicure got nicked in a few places while I was having to dig all the computer stuff out again. Oh well.)

The flight from Orlando to Fort Lauderdale was completely full, which surprised me. It was a huge plane. I was expecting a puddle jumper. I was sitting next to an older gentleman who was reading Why Your Life Sucks - extensively marking sections with a green highlighter. (I am not making this up.) The man never made eye contact with me, never smiled, never said hello. I came very close to telling him one reason that his life sucks which that book may not explore is he's ignoring all those around him, blocking himself off, not connecting at all. But I'm sure he would find that mere psychobabble! ;)

Luckily for me, a much nicer gentleman, Luis Acevedo, came and sat in our three-seat aisle also. I was in the aisle seat and scooted over to the middle - by Grumpy Man Whose Life Sucked. He was just returning from New Orleans. His business, Walls of Italy, specializes in venetian plaster, stone finishes, crackle plaster and all of those Old World finishes and is getting quite a bit of business from New Orleans. (He's even doing some work on restoring some of the old cemeteries.) Here's some of his work... 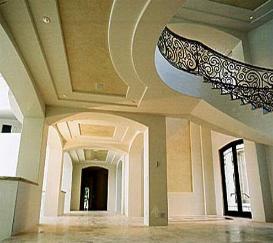 What I liked most about his business is he does the actual work himself. When we were talking about it at first, I said, "But you're the salesman, right? Someone else does the work." But no. He does it all himself. And he's working on the Ritz Carlton in New Orleans too. Impressive stuff - if you want walls of Italy, call Luis. Because he's very passionate about what he does - and he's a nice guy. He went out of his way to tell me where to go, where to eat, what to do...he even gave me his cell phone number and said if I got lost anywhere to just call him. (I'm famous for getting lost. I rented a car. I shared that with Luis.)

I did get lost leaving the aiport. I didn't call Luis though.

I wasn't really lost, at first. I was just reading my directions and I realized that I had just missed the Griffin Road South exit I should've taken. No problem, say I, I will just turn around. Wrong! I came to an area - at 6 p.m. rush time - that's a kind of amalgamation of several different interstates and the Florida Turnpike. I had to pay 25 cents stupidity tax (the toll road on my turn). And, somehow, through sheer dumb luck, I know not how, I looped around to a Griffin Road exit on the Turnpike - and, miraculously, it was the same Griffin Road. And, miraculously, I had printed off directions from the hotel on how to get there - which included directions from the Turnpike. All's well that ends well, right?

The group who invited me to speak at this conference took me to dinner tonight at the Brass Pro Shop restaurant. I had the Grouper Portofino, which was delicious. They kept offering dolphin - and I finally turned to one of my cohorts and said, "Y'all eat dolphins here? Like Flipper?" No worries, mate. It was a dolphin fish, not a dolphin. I still couldn't eat it.

The restaurant had a sushi menu and one of the women said, "You probably don't have any sushi in Mississippi, huh?" I tried not to roll my eyes. I really did. She didn't mean it like it sounded. But I corrected her nonetheless and let her know that Jackson had a surplus of great sushi restaurants (my favorite being Nagoya, but just as many love Little Tokyo).

I don't have to give my speech until 6 p.m. so I have the whole day to play (unless someone from work is reading this, in which case I will be in my hotel room all day slaving away on the computer - not at the beach. I promise. Really.).

Posted in My Crazy Life | Permalink