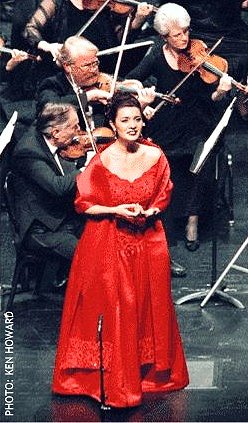 The first time Isabel Bayrakdarian heard an opera she was 17 years old. Her thoughts on Strauss's Ariadne auf Noxos? "I thought, I could probably do better," she tells Catherine Hong in W magazine (Feb. 2006). I like this girl! ;)

She had sung only in church and had taken no vocal lessons - but, it seems, she was definitely right. The 31-year-old Canadian-American is considered among opera's important talents already, landing such plum roles as Susanna, Zerlina and Rosina. She has performed on most of the world's major stages and has even sung in Elvish. (She performed on the soundtrack to The Lord of the Rings: The Two Towers.)

An interesting career path for a women with a biomedical engineering degree from the University of Toronto. (She entered the Metropolitan Opera National Council Auditions in 1997 on a lark. "I did it for fun," she tells Hong of her decision to compete against nearly 2,000 others - most of which had studied at music academies.)

Three years after her Met triumph, she won Placido Domingo's high-profile singing competition, the Operalia - and since then, the world has been her oyster. If you want to check her out for yourself, she will appear at the Chicago Lyric Opera on Feb. 25 for Gluck's Orfeo ed Euridice and in June she will make her debut at London's Royal Opera House.