« Lost Marlene Dietrich Love Poetry Found | Main | Just how much can you lose? » 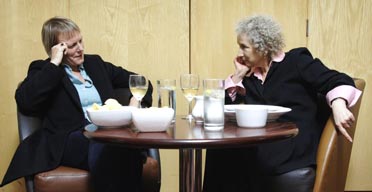 Novelist Margaret Atwood made her acting debut in October as Penelope, Odysseus’s wife, a character from her latest book, The Penelopiad—a feminist account of Homer’s The Odyssey. Atwood collaborated with Phyllida Lloyd to create a staged reading of The Penelopiad, which was performed at St. James’s Church in London. Three other actresses played the characters Odysseus, Helen of Troy, Penelope’s mother and the 12 maids who were hanged by Odysseus.

Atwod and Lloyd first met in 2002, at the premiere of the opera of Atwood's novel The Handmaid's Tale, directed by Lloyd. The Guardian interviewed Atwood about her debut.